Let me start off by saying that I am just not a morning person. I know, hard to believe considering I’m usually so vivacious and full of life, but trust me, not a morning person at all.  Mornings find me reluctantly prying my eyes open, grumpily climbing out of bed and staggering my way straight to the coffee pot to whip up that magical wake-the-heck-up-already cocktail. Greg, who is in my mind entirely too happy when he wakes up, used to call me Satan every morning until our counselor mentioned that it might have a somewhat detrimental effect on my mood…now he just steers clear of me for an hour or two until the caffeine kicks in and food starts absorbing into my system and revving my engines.

Greg was giddy with excitement when he returned from his motorcycle tour of the Kootenays last weekend with a gift for me. I’m not a big gift lover (what can I say, it’s not one of my love languages!  I love home-made gifts, though) and he knows this, but it doesn’t stop him from always bringing me a little something when he’s been away.  Here is my “gift” from the Kootenays…

As I’ve mentioned in a previous post, one of Greg’s favorite nicknames for me is Cougar and he thoroughly enjoys adding flame to the fire any chance he gets.  Hence the “gift”.  I chuckled when he gave it to me, but didn’t bother to read any of the info. Last night, however, I went to climb into bed and it was sitting on my pillow.  Naturally, Greg was lying on his side of the bed, pretending to watch TV and grinning like a fool.  Okay, I sighed. I’ll read it.

Talk about hilarious.  We were crying by the end of the pamphlet and my sides were aching.  So, this morning when I’d performed by morning routine and settled in with a nice, hot cup o’ java, I decided to read it again and, just like that, my morning poo poo mood disappeared.

For those of you who don’t understand why this is so funny, according to Urban Dictionary, a “Cougar” is a:

Noun. A 35+ year old female who is on the “hunt” for a much younger, energetic, willing-to-do-anything male. The cougar can frequently be seen in a padded bra, cleavage exposed, propped up against a swanky bar waiting, watching, calculating; gearing up to sink her claws into an innocent young and strapping buck who happens to cross her path. “Man is cougar’s number one prey”

While this definition does not pertain to me in any way except that I am a few years older than Greg and we hooked up at a nightclub…you get the picture.  Having said that, here are a few of my favorite tips from the Safety Guide to Cougars:

British Columbians are fortunate to share their province with cougars, one of the most mysterious and elusive of all creatures…

Cougars are most active at dusk and dawn. However, they will roam and hunt at any time of the day or night in all seasons…

Cougars are predators and their actions are often unpredictable. We have little understanding about what might trigger an attack…

Working in Cougar Country: Carry a sturdy walking stick to be used as a weapon if necessary…

This last part made us laugh the hardest.

If you meet a cougar:

Oh, there was much more, but I’ve made you snort enough for one day.  What can I say, my husband has a very “guyish” sense of humor and I really love that about him.

Enjoy your day, all of you Cougars out there!

Here’s a few pics of our trip to the beach last night. It was almost full dark, but I managed to grab a few shots of the hubs and the pooches!

We’ve been trying to steer Juno away from his tennis ball obsession, so we’ve started using bubbles at play time instead of the tennis ball. Don’t worry, they are safe to eat. 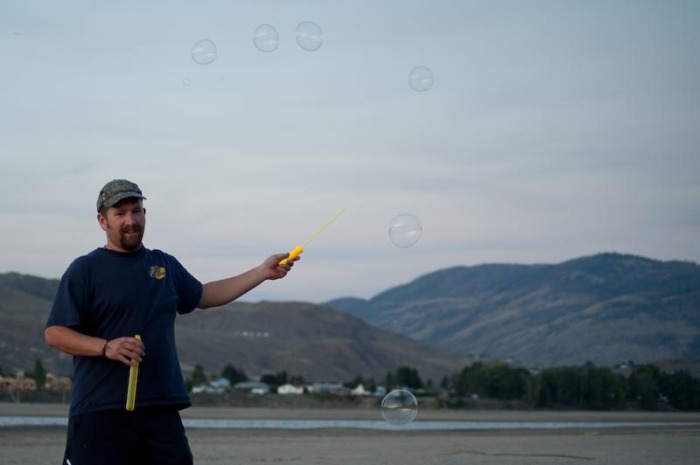 And boy oh boy, does he loooooove to jump up and eat them. 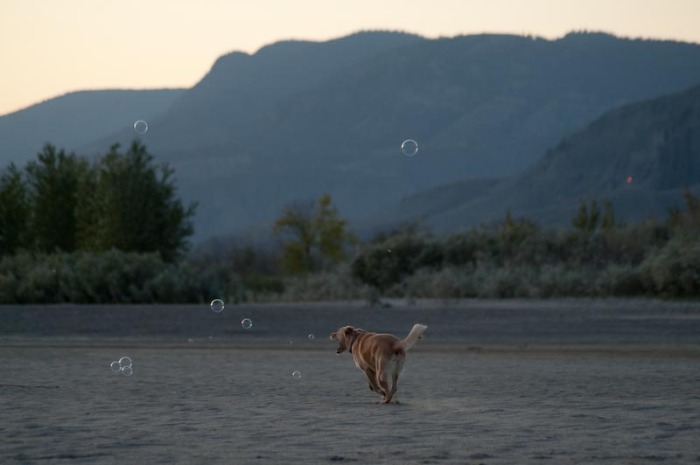 Okay peeps. Have a great day. I wish you all enough.