Well, imagine my chagrin when I logged onto my blog today and realized it has been nearly two weeks since I’ve blogged ANYTHING.  The Nerrrrvvvvve, I thought to myself as I immediately gathered some blog material together. How could you be so neglectful??? This little voice would have probably gone on for hours had I not recognized it’s persistence and told my own mind to, in no uncertain terms, suck it!

The truth, peeper peepertons, is that the last couple of weeks have been so hectic that I really haven’t had a chance to blog it up.  For one, I have been sewing up a storm, trying to get all of my Christmas present projects finished in time. It has been one crazy sewing experience – I even headed to Vancouver to visit my Aunt and use her giant quilting machine to get my projects done in time. I’m happy to say that I have eight days left until Christmas and all I have to do is add a few finishing touches and POOFTA, bring on the gift openings! I’m literally dying to post some pictures of what I’ve made, but I can’t because it would give it away to all the ladies in my family and some of my friends as well.  Don’t worry, though, I’ll post them as soon as Christmas is done. Greg (unbeknownst to moi) took a picture of me while I was working away on my projects and I found it when I downloaded some pics from the camera. You can see by the picture that our house has been made into a sort of “Jo’s Sewing Workshop”.

And, just to break up this post a bit…isn’t this the cutest picture of Juno?  Greg took it the other night when I had already gone to bed and Ju was enjoying a yummy bone (on the living room carpet, where bones are generally not allowed…*sigh*). He’s all cross-eyed cuteness. I wuv him!

For all of my south of the border readers who enjoy living in warmer climes, you’ll be happy to know that it was only a brisk -20°C (that’s -4°F) last week. I thought it was bad here, but the folks in Edmonton and Calgary had it even worse with temps reaching anywhere from -35 to -50 with the wind chill factor (or the Wind Shield Factor, which is what a lady I went to university with (no names Courtney) used to call it!!!). Needless to say, brrrrrrr.  The cold weather brought on two “situations” for us. One, I turned into a crazy b**ch because I detest being cold and, two, Juno needed to utilize the treadmill twice a day to get rid of his excess energy, but our treadmill is on the fritz. Imagine the little guy’s horror when he stuck his nose out the door the other day, brought it back in, shook his head and ran to the treadmill with a look of sad, doggy longing on his furry face.  Imagine the heartbreak when I couldn’t let him run on it because of its decision to break when we needed it most. He just sat beside it, looking at me and then looking at the treadmill and then looking at me again as if to say, Woman, do I have to spell it out for you????? He eventually gave up and lied down beside it and fell asleep, but he repeated process three to four times that day before he finally seemed to get it. No treadmill for Juno this winter. Not unless we can figure out how to fix it. Boooooo.

However, the cold weather is not all bad because it brings out the sun in spades. I took this on the coldest day last week from our porch. Does this look like -20 weather to you?

The day after I took this picture it snowed and I woke up to a winter wonderland. First time this year that snow has stuck in our part of town and, since it was a balmy -16, I decided to take the dogs to the beach for an adventure. Wonder of wonders, we were the only living beings for as far as the eye could see. The sun was just coming over the mountain when we got there, so I snapped a few pics.

I also snapped a few of the dogs before my fingers felt as though they were going to fall off or become frost-bitten. It was so cold, but so pretty! 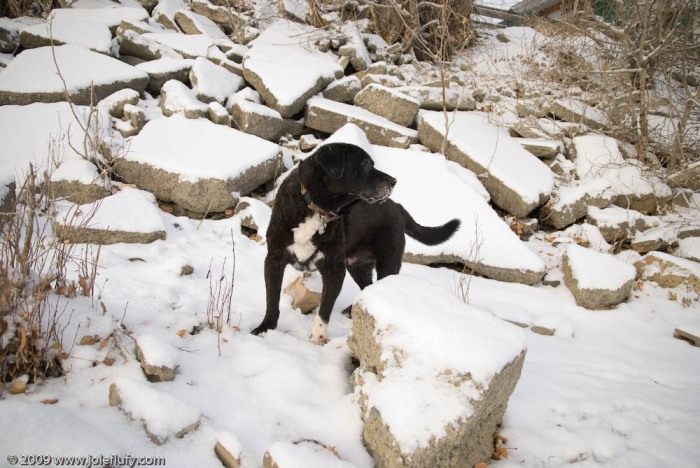 Guaranteed, if there are sticks on the beach under the snow, Juno will find them and dig them up.

Aside from sewing, trying to keep the dog entertained and exercised in creative ways and party hopping for the last three weekends (we actually did three parties in one night last Saturday – I was so tired), we’ve also stumbled upon some exciting news that I’ll be talking about a bit more in a few upcoming blogs.

For now, the silly season is truly upon us and I’m trying to juggle work, family, Christmas, and a whole new set of ideas and projects for the upcoming Bridal Fair in January at TRU (Engaged ladies, it’s on January 31, 2010 at the Campus Activity Centre and starts at 10 a.m. Admission is Free and there are tons of cool prizes and even a chance at winning a wedding dress!!!).

I’ve also been meaning to blog about Zen Rising, a local band with some uber talented musicians in it. I’ll get to that after Christmas and, if I don’t connect with you before then, have a wonderful holiday with your friends and loved ones and remember that dreams, no matter how big or impossible they seem, can always come true if you just believe!!!!!!

Good night my friends. I wish you enough…