I remember the first time I ever saw him. Tiny little black sausage body and big head with floppy little ears. He was in the box that he’d been found in – about five weeks old and completely alert. His little tail was wagging up a storm as he stood on his hind legs and put his two front paws – one black and one white – on the edge of the top of the box. I leaned down to let him see me and he licked my face from chin to forehead. When I reached in to scoop him up, he squealed like a piglet and squirmed nearly out of my hands until I blew in his face and he instantly calmed down and sniffed my face again, licking my nose. I knew instantly that I’d found my best friend for many years to come.

Today that friendship, which lasted nearly 16 years, came to an abrupt end and my furry bestie – a dog who has been with me through so many twists and turns in my life – breathed his last breath. I can’t say that I am devastated by the loss for I’ve suspected for a few months that he was on his way out, but I do feel the loss. I think Greg may have been hit the hardest by Dyogi’s passing as he hasn’t had to deal with the loss of many beloved pets and he really loved the Boss Dog Bulldozer (which is what Greg loved to call him).

Dyogi once ran 14 km down the highway from my place in Pineview Valley to my dad’s place in Valleyview. They found him hanging out in their front yard after dinner one night. It turned out that some free range bulls got into the yard and spooked him and once he started running, he must have kept going until he saw some familiar signs to follow. On another occasion he ran the opposite way, ending up in my backyard after I’d left him at my dad’s while I was away on vacation. My boyfriend was staying at my place and opened the back door to find the pooch sitting on the door mat. Where do dogs get their uncanny sense of direction anyway?

The third and final time he escaped the yard, he followed a female dog who was in heat (even though he was fixed at the time) who had walked by. I found him 10 hours later, on the other side of the river at a beach where I often took him to play. I ran into a man there who said he had seen Dyogi swim the river earlier that day and, when he made it across, he had shaken himself off, lay down on the beach with his head between his paws and had stayed like that nearly the entire day until I found him. The man told me that during the day, my dog would occasionally get up, play with a dog or two and then settle back down to wait.

After the river swimming incident, he never ventured far from the yard again. Three huge adventures must have been enough for him.

Yesterday morning, I took him and Juno to the beach. He spent the time roaming and sniffing and exploring and I thought to myself, Wow! Is this dog ever going to slow down??? This morning, he was making his way to the top of the stairs and he suddenly fell over and had a full-body seizure. All we could do was sit with him and comfort him until it was over and then rush him to the Vet. His system was shutting down and his liver wasn’t functioning anymore. He couldn’t stand up for more than a few seconds – such a change from yesterday when he looked like a puppy playing at the beach. The vet told us that the seizures would continue and he would continue to go downhill if we decided to let nature run its course. It was an easy decision to make the call to put him to sleep and it was obvious to me that he was perfectly okay with our decision. At one point, he just lifted his head from Greg’s leg and looked at me with tired eyes before dropping his head back down and wagging his tail. We sat together with him on the floor of the exam room while the vet shaved his leg and inserted a needle to send him off to the big sleep. And wouldn’t you know it, he slowly wagged his tail up until the last second of his life.

It was a nice feeling, sitting there with Greg and feeling Dyogi’s tail slowly thump against my leg until his heart stopped and he relaxed and we could say our goodbyes to the old guy. I feel very peaceful tonight and grateful that I was lucky enough to have such an amazing animal by my side for nearly 16 years.

He the first and only dog that I’ve had that belonged only to me and he was the best dog a girl could have ever asked for. Loyal. Happy. Protective. Intelligent. Easy going. Soothing. Comical. He has a wise and beautiful soul and I feel blessed to have had him in my life for as long as I did.

RIP Boss Dog. Happy travels on the other side 🙂 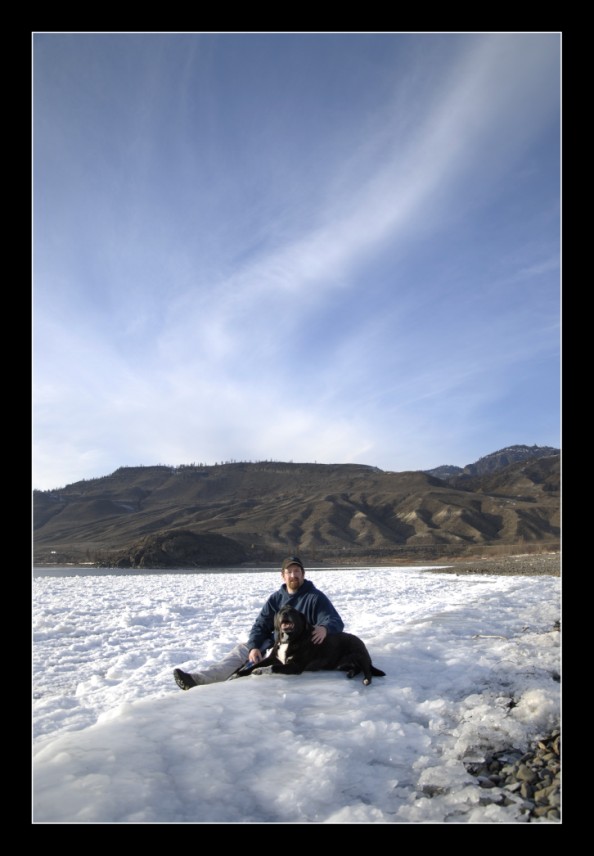 Good night my friends. I wish you all enough…